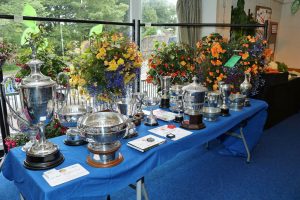 The Victory Challenge Cup– Awarded to the most outstanding exhibit in Cut Flowers, Pot Plants or Hanging Containers sections – Classes 1 – 70

The Perth Merchants Challenge Trophy – Most First prizes in show

Class 58 in memory of Jack McNee

The Donachy Trophy – Most points in section